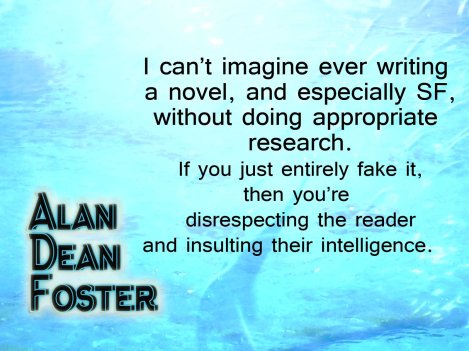 Having an Alan Dean Foster book at home, back when I was a teenager, usually resulted in conversations like this:
“I’m reading that! Give it back.”
“Well, I’m reading it now. You just left it there.”
“For two minutes!”
“Well, you shouldn’t have just left it there. I’m reading it now. You’ll just to have wait.”
It was no good appealing to mum, because she would only confiscate the book and read it herself, or was the one doing the stealing.
This only ever happened with Terry Pratchett and Alan Dean Foster works.
So, I couldn’t believe it when the Alan Dean Foster replied to my request for an interview with a yes! I couldn’t sleep for two nights thinking of all the questions I might ask him. It was a dream come true, to converse with (or rather, write to) a writer who has influenced my life, never mind my writing.
I could blather on about Mr Foster and his books, and my family’s habit of contesting reading rights over his work, but you’ll want to know what wisdoms this master of sci-fi and fantasy has shared with me. I won’t keep you waiting any longer.

You’ve been successfully creating and writing sci-fi/fantasy for the past four and a half decades on a scale which makes the word prolific seem inadequate. What is the biggest change you’ve noticed in sci-fi/fantasy publishing since you first began your writing career?
It would have to be the immense proliferation of spin-off books from major film and TV franchises. Hundreds of books featuring the worlds of Star Wars, Star Trek, Alien, Dr. Who, and so on. These simply did not exist when I began. Perry Rhodan was a big deal, but that was simply an expanded literary universe. 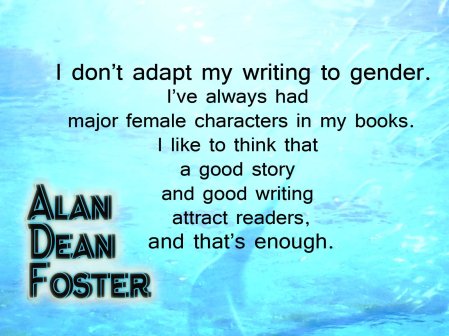 Do you think readers have changed as well: in demographics, as well as their expectations of stories? If so, how have you adapted to this fact?
Certainly more women are interested in science-fiction, both as writers and readers. There was always a significant female readership for fantasy, but as more women have moved professionally into technology and science, this has been accompanied by a greater interest in the field.
Publishers have responded by buying more books by women writers, including those that slant specifically toward a female readership.
I don’t adapt my writing to gender. I’ve always had major female characters in my books. I like to think that a good story and good writing attract readers, and that’s enough.

Do you think writers will have to adapt even more in the near future as publishing evolves further?
The problem for writers, as for any creative folk who make a living from their work, be they writers, musicians, film-makers, painters, etc., is piracy.

It’s going to become more and more difficult to make a living from creativity unless better ways are found to protect a creator’s work.
Until AI becomes human-equivalent, there will always be a niche for genuine creativity.

If there was one thing you could change about recent sci-fi/fantasy publishing trends, what would it be?
I’d like to see more real-time feedback on sales from publishers, as opposed to booksellers. But that’s not in the publishers’ interest. I’d also like to see more international SF translated, not just into English, but both directions.

What is your favorite current trend in publishing.
As much as I love holding a “real” book, there’s no question that eBooks have made books more accessible to people. I do think it’s important that buyers own the eBooks they buy, instead of eBook publishers having the option to delete them. I also think prices for eBooks need to come down.

I’ve noticed a slight, yet significant increase in the number of new sci-fi/fantasy anthologies, journals and e-zines. I’ve been wondering if (hoping) this might herald the start of another ‘Golden Age’ in sci-fi writing. What are your thoughts on this?
Terms like “Golden Age” are useful for categorizing periods in history.

Only future generations will be able to label current publishing.

However, there’s no question that the ease of use of the Internet allows for hundreds of journals and zines that due to the cost of print and distribution would otherwise would never have appeared. We’re in an age when anyone can be a publisher. 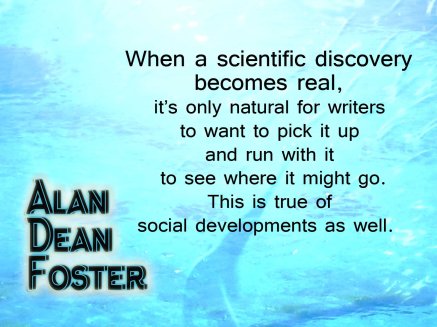 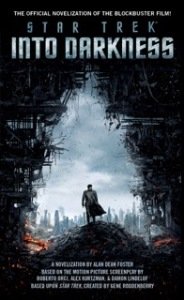 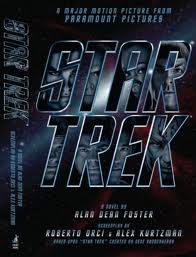 The late 1970s-1980s saw dystopian stories in both movies and publishing take off, while space exploration (Star Trek) and space operas or battling galactic empires, as in Star Wars and The Last Starfighter, proved immensely popular. In the 1990s-2000s genetic manipulation, and cyberpunk seemed to lead the trend. Recently dystopias seem most popular again. Do you think we write in a very cyclic genre which may reflect the daily concerns and dreams of our readers?
Science-fiction has, to a certain extent, always reflected reality. A good example is the number of apocalyptic stories that appeared after the advent of the atomic bomb. Another would be, as you point out, genetic manipulation.
When a scientific discovery becomes real, it’s only natural for writers to want to pick it up and run with it to see where it might go. This is true of social developments as well. For example, both strong female and black characters were largely absent from early SF. As society matured, that changed to the point where no one even remarks on it any more. 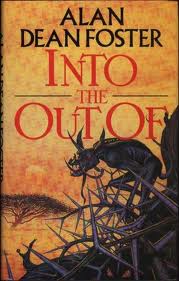 One of the aspects of your writing that I love is, while I’m reading a fantasy like ‘Into The Out Of‘, I’m learning about a culture you’ve visited and researched, or while I’m reading Spellsinger, I discover that six-foot otters actually do exist in the real world. With writers expected to produce both longer and a great number of series, and to produce more than one book in a year, do you think research, and therefore the mind-expanding educational aspect of sci-fi/fantasy is at risk?
It depends on the writer.
I can’t imagine ever writing a novel, and especially SF, without doing appropriate research. If you just entirely fake it, then you’re disrespecting the reader and insulting their intelligence.
For my current novel-in-progress, SECRETIONS, I’m doing a fair bit of research on gastropods.

Some of what I use may mean nothing to most readers, but the science is there for anyone who wants to check on it.

OSHENERTH, a recent novel, is pure fantasy, but since it takes place underwater it is based as much as possible on my experiences with diving.

The Spellsinger series is still my favorite from your work, probably because I consider it a cross-subgenre series. For me it successfully combines science fact with what was then science-fantasy, and blended in high fantasy with the Sword and Sorcery structure and scenarios. Do you think the popularity of cross-genres has grown since then? Will you be writing more cross-genre/subgenres soon?

When I start a piece I never contemplate to which genre or sub-genre it might belong. I just write the stories and leave the classifications to those who are interested in such things.

MADRENGA, a recent and as yet unpublished novel, is primarily fantasy, but includes one or two rather shocking non-fantasy elements.

Recently we’ve seen a lot of YA sci-fi adapted for movies. You have an enviable amount of experience in helping creators bring worlds to life (it’s mind-blowing that you ghost-wrote Star Wars!), as well as converting screenplays into novels (from Star Trek to Transformers via Dinotopia). Do you find it easier to novelize a screenplay or vice-versa? Why do you think that is?

It’s much easier to extract a screenplay from a novel than it is to turn a screenplay into a book. Novels are far denser and replete with much more material.

I’m amazed and delighted that you’ve been constantly publishing new novels each year. One of your more recent trilogies is set in Southern Africa — both South Africa and the Namib Desert. Was writing and finding a publisher for the Tipping Point Trilogy different in any way from other trilogies you’ve written?
Not in that instance, no. Although I’ve had books issued by numerous publishers, I’ve been with Random House/Del Rey from the beginning, and they did The Tipping Point books.

You have exciting new releases planned into 2018. Will these all be stand-alone novels, or is there a new series on the way?
BY THE THROAT is the first new Pip and Flinx novel since FLINX TRANSCENDENT, so that is part of that continuing series. RELIQUARY is stand-alone SF. Both will be published by Del Rey. We’ll see who does MADRENGA. The book I am currently writing, SECRETIONS, is stand-alone SF but is set in the universe of the Commonwealth, an on-going series. So, no new series…unless I decide to continue with the storyline of OSHENERTH. Time will tell. 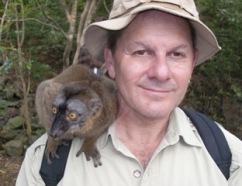 Born in New York City in 1946, Foster’s writing career began in 1968 when a Lovecraftian letter of his was published as a short story in The Arkham Collector. His first novel, The Tar-Aiym Krang, was published by Ballantine Books in 1972.
Foster’s sometimes humorous, occasionally poignant, but always entertaining short fiction has appeared in all the major SF magazines as well as in original anthologies and several “Best of the Year” compendiums. His published oeuvre includes more than 125 books.

Foster’s work includes hard science-fiction, fantasy, horror, detective, western, historical, and contemporary fiction. He has written numerous non-fiction articles on film, science, and scuba diving. In addition, he has written the novel versions of many films, including such well-known productions as Star Wars, the first three Alien films, Alien Nation, The Chronicles of Riddick, Star Trek, Terminator:Salvation, and both Transformers films.
Other works include scripts for talking records, radio, computer games, and the story for the first Star Trek movie. His novel Shadowkeep was the first ever book adaptation of an original computer game. His work has been translated into more than fifty languages and has won awards in Spain and Russia. His novel Cyber Way won the Southwest Book Award for Fiction in 1990, the first work of science-fiction ever to do so. He is the recipient of the Faust, the IAMTW Lifetime achievement award.

Foster’s love of the far-away and exotic has led him to travel extensively. He and his wife JoAnn Oxley, have traveled to Europe and throughout Asia and the Pacific in addition to exploring the back roads of Tanzania and Kenya. His extreme adventures include: pan-frying piranha, rappelling into New Mexico’s fabled Lechugilla Cave, driving solo the length and breadth of Namibia, swimming with giant otters in Brazil, and diving unexplored reefs throughout the South Pacific and Indian Ocean. His filmed footage of Great White Sharks feeding off South Australia appeared on both American television and the BBC.

Foster has taught screenwriting, literature, and film history at UCLA and Los Angeles City College as well as lectured at universities and conferences around the world.
He is a member of the Science-Fiction Writers of America, the Author’s Guild of America, and the Writer’s Guild of America, west. His correspondence and manuscripts are in the Special Collection of the Hayden Library of Arizona State University, Tempe, Arizona.

The Fosters reside in Prescott, Arizona, along with assorted dogs, cats, fish, several hundred houseplants, visiting local wildlife, and the ensorcelled chair of the nefarious Dr. John Dee.
Foster is presently at work on several new novels and media projects.

My effusive thanks to Alan Dean Foster for taking the time to answer these questions, and for his patience and good humour. And now it’s over to you. No links, please just comments. Thanks